Centennial Hall was constructed in two phases in the early 1900s and served as the entire campus for the Colorado Women’s College. The building was vacant from 1982 until completion of the renovation and rehabilitation work in 2015. This project served to establish the building as a 21st Century academic center for Johnson and Wales University. Inside the building, original historic features such as the central stair were rehabilitated. Where possible, historic materials were retained in the building. Organ pipes and seating were relocated throughout the building as art pieces and the original wood doors were re-used as wood wainscot and built-in furniture throughout the building. In several conference rooms and offices, the original brick walls, wood trusses, and brick fireplaces are visible. On the exterior of the building, one addition was constructed to address egress requirements. In addition, a new entrance plaza was established to directly connect the building to the rest of the campus. 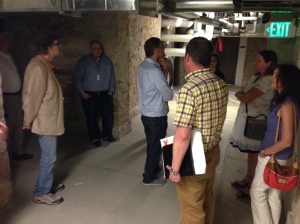 Founders Hall was constructed in 1929 as a residence hall for the Colorado Women’s College. Since its completion, it has also served as office and student activity space. The growing need for campus housing prompted Johnson and Wales University to return the building to its original use. The rehabilitation and renovation project, completed in 2015, established the building as a 170 bed residence hall. The project included construction of additions to maximize capacity. The additions were designed to be sensitive to the historic character of the existing building.

Following the tour, the annual meeting was held at Fiction Beer Company. At the meeting, new board members Michelle Chichester, Nicole Lane, and Cat Brown were elected. Current board members Ian Glaser, Kristen Craig, and Bret Johnson were re-elected. Natalie Lord and Jessica Reske remain on the board as they are mid-term. The group reviewed events which occurred in 2015-2016 and discussed upcoming events and possible future events. Existing membership and financial information for the organization was reviewed.